All About Presidents Cup Golf 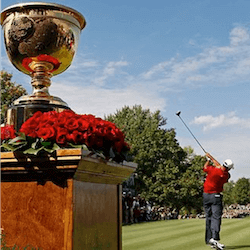 An Introduction To Presidents Cup Golf

The event is held every two years and its similarity to the Ryders Cup led to the event held in the years between Ryder Cup events. The event is held at venues across the world but this year it will be held at the Liberty National Golf Club in New Jersey, America.

The Presidents Cup uses a match play scoring system. Each of the teams has a 12-man side and in general the tournament sticks to the Ryder Cup format.

Each side has a captain. The job of the captains is to select the pairs in the events that feature doubles play. The won matches contribute one point to the team’s score. The highest score possible is a perfect score of 30, which means a side needs 15.5 points to be awarded a win. A 0.5 can be scored by a draw match.

Each side in the tournament relies on their team captains and their assistants to progress and develop their game. This year the American side will have Steve Stricker as captain. Fred Couples, Tiger Woods, Davis Love and finally Kim Furyk will assist him.

The International side will be captained by Nick Price. His assistants are Ernie Els, Tony Johnstone, Mike Weir and Geoff Oglivy.

Dustin Johnson and Jordan Spieth, who are the most celebrated players on this team, will drive the American side.

Statistically speaking the International side does have a disadvantage against the American team but with Jason Day, Hideki Matsuyama and Adam Scott, they will be providing a very strong challenge.