The Presidents Cup: A Predictable Affair 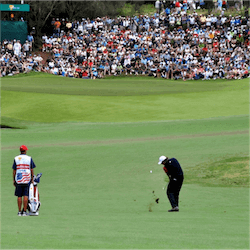 The Presidents Cup Under Threat

The longevity of Golf’s Presidents Cup is being threatened by a very unusual culprit – and at the same time, a very logical one when you think about it long enough:  a complete lack of rivalry.  Rivalry starts to become a reality for many of us from the minute that we graduate from the diaper-era into the “that’s my rattle and you don’t get to play with it” period.  The most notable version of the same sequence of events – albeit the more mature edition – is the 30 year tech rivalry between Microsoft’s Bill Gates and Apple’s Steve Jobs.

From this was born the very software that we now deem to be indispensable – and one must wonder how much good would have come of the entire business had there not been intense competition driving the wheels of innovation and invention.

Jobs and Gates, Johnson and Bird, Federer and Nadal – famous rivalries that have shaped everything from technology to tennis.

Last week saw Presidents Cup captains Steve Stricker and Nick Price announcing their respective captain’s picks – effectively moving the last of the wheels into motion ahead of this year’s event.  Despite all of the hype leading up to the event – the Internationals have been consistently failing to make a game of it, this year heading into the battle not having won the event even once during the current century.

The truth is, you can have only so much hype and electricity if one side constantly wins and never gets knocked down from its pinnacle of pride.  This has sadly become the prevailing situation for the Presidents Cup.  The Americans are forever winning – and yet another victory has become a thing of general assumption as far as the 2017 event goes.

There doesn’t seem to be anything left for the imagination.

A Ray Of Hope

All of this having been said, it’s also true that whilst there hasn’t been much variety as far as winning is concerned, the competition has been getting closer.  Korea of two years ago comes to mind – it was a tight squeeze then and it could very well be a tight squeeze, or even a rollover, this year.

Korea was very much a glimpse into an alternate reality – a short but exciting glace at what could be should the International side shape up and bring their A-Game to the table.

Perhaps Korea will prove to be the saving grace for golf’s Presidents Cup yet. If you feel the same, or different, you can put your money where your mouth is and head on over to Sportsbet to back who you think will be the ultimate winner.