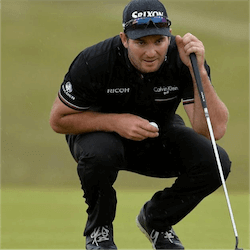 It’s official: Kiwi pro-golfer Ryan Fox is teeing off at The 146th Open Royal Birkdale.  When asked what it felt like to have qualified to play in such a prestigious event, all round nice guy Fox replied that he was relishing the idea to play in The Open and that he was sure that his family would be coming over.

Fox has every reason to be elated and optimistic – The 146th Open Royal Birkdale, set to commence on 20 July and running through 23 July – will find Fox in his best form yet.

Fox secured his spot in The Open by finishing in a shared fourth place at the Irish Open earlier this year.  The sterling result also bumped Fox up into 28th spot in the European Tour’s Race for Dubai – the Kiwi now counting among 100 players qualifying to compete in next season’s Tour.

The 146th Open Royal Birkdale will be the Kiwi star’s second major tournament – having finished in a shared 49th overall position during the 2015 Open.

Ryan Fox may have been destined for success being the son of legendary All-Black Grant Fox, but he has certainly made a roaring success of paving his own way in the world of professional sports.

Ever humble, Fox said that it was nice to finally be able to approach the game in the same manner that the big guns do – not having to worry about money and making a living but instead just getting out there and winning.

Fox went on to say that it was a pleasant prospect to be playing alongside fellow Kiwi Michael Hendry at this year’s 146th Open Royal Birkdale, and that he was hoping that the duo would be in a position to do New Zealand proud.

Is Three A Crowd?

Danny Lee played a disappointing game at the Greenbrier Classic, finishing in a share of 9th position and missing the golden Open ticket by three shots.

The 2017 Greenbrier Classic is a repeat-disappointment for Lee, currently World No. 8,  having not been able to defend his 2015 title last year as a result of the event not taking place due to floods.

The disappointment no doubt comes in at an extra hard blow – with Lee having played a practically spotless Round 1.  Round 2 saw him finding a fairway bunker, and it was all downhill from there.