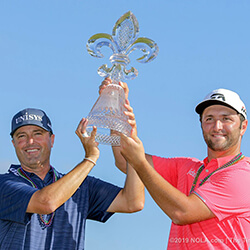 American Ryan Palmer and Spanish John Rahm have won the Zurich Class of New Orleans team match by three shots, beating England’s Tommy Fleetwood and Spanish Sergio Garcia. The overnight leaders Palmer and Rahm claimed three under 69 and finished on 26 under. Fleetwood and Garcia finished three shots behind after their final round of 68, and finishing the day in second place.

The victory for 42-year-old Palmer was the first on a PGA Tour in almost a decade, while Rahm has amassed three wins in the last three years. The pair joined up because Jordan Spieth, who played with Palmer at the event in 2018, was not available to play, while Rahm’s partner, Wesley Bryan, is still in recovery from an injury to his shoulder.

Talking about their latest win, Rahm said that it was incredible the way it happened, and that Palmer had started off playing well, while Rahm had struggled at the beginning and only came through midway through the event, and then Palmer had finished it off, adding that the entire thing was amazing.

He continued by saying that to win as a team is something that doesn’t happen very often in golf, and that he hope it happens again in the future. South Korean Lee Kyoung-hoon, as well as American player Matt Every finished off the matched tied for third place on 21 under, sharing the spot with Slovakian Rory Sabbatini and American Brian Gay.