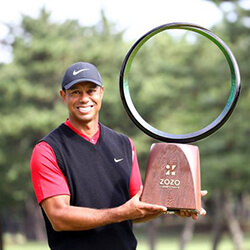 Tiger Woods has won his 82nd PGA Tour Title after his latest victory at the Zozo Championship. The 43 year old world number 10 had a total of seven holes to finish in Japan as he matched American Sam Snead’s record that was set in 1964. It was Wood’s first event since having his fifth knee surgery just five weeks prior. In April earlier this year, Woods claimed his first major in 11 ears thanks to his victory at the Masters, which left him three short of a record of 18 major wins, first set by Jack Nicklaus.

Snead was 52 when he won for the final time on the PGA Tour, while Nicklaus had been 37 when he took the last of his major trophies. After Woods claimed his record-equalling win, he told reporters that as far as playing until he’s 52 years old, he hopes that it will be the case. He added that if he had been asked a few years ago, he would have given a different answer, but that the future was looking bright for him, finally adding that he was very appreciative as there was a time where he thought he’d never play again.

After his latest win at Augusta, Woods missed the cut for the PGA Championship as well as the Open Championship, a time that also co-coincided with his four back surgeries. The player is hoping to return to Japan to compete in the 2020 Tokyo Olympics.