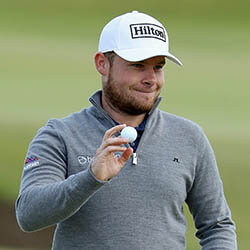 British Tyrrell Hatton has won the Turkish Open at the fourth extra hole following a six-man play off. The Ryder Cup player, who is 28 years old, claimed the win after Austrian Matthias Schwab missed a short par putt. They finished the day under floodlights after six players had tied on 20 under par. American Kurt Kitayama was knocked out of the event after three holes, whole French pair Victor Perez and Benjamin Hebert, along with South African Erik van Rooyen were eliminated during the first hole.

It proved to be an exciting afternoon at the Montgomerie Maxx Royal course that saw the event ending with the first six man play offs on the European Tour since 2003. And deciding the outcome needed four tries at the 18th hole, along with a par five of 558 yards. Kitayama and Schwab had made birdies the first time they played, and needed a chip in from off the green to keep Hatton playing, as the other three had been knocked out. The American player had originally set the target at 20 under, and shot nine birdies in eight under 65, the lowest round of the day.

It was Hatton’s fourth European Tour title, and the first since he won the Italian Open in October of 2017. He has been given the first place prize of $2 million, and has jumped to sixth in the Race to Dubai leaderboard, with only two events remaining for the season.