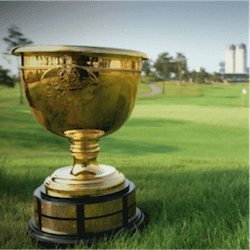 Gearing Up for the 2017 Presidents Cup

The event is held alternately in the United States and in countries making up the International team.  The format is similar to that of the Ryder Cup, consisting of twelve players to a side.  Each team includes a non-playing captain – responsible for choosing the pairs competing in the double events.  Each match – whether a double or a single match – is worth one point.  A half point is awarded in the event of a halved match.

The year 2000 saw the contest being extended from 3 to 4 days, with a number of other small changes to the format having been made since 1994.  The final day has always consisted of 12 singles matches.

The Presidents Cup is organised by the PGA Tour and was also created by the same body.

The 2017 Presidents Cup will be played from September 26th up until October 1st at the Liberty National Golf Club in New Jersey.  Steve Stricker will be the captain for the United States with Nick Price at the helm of the International side.

The team selected to play for the United States will consist of the players who earn the most FedEx Cup points, from the 2015 BMW Championships running through the 2017 Dell Technologies Championship, as well as two captain’s picks.  Points earned during 2017 will be worth double value.

The captain’s picks for the 2017 Presidents Cup will officially be announced on September 6.

Tiger Woods has announced that he will be one of the captain’s assistants for Team US, with Ernie Els doing the same for team International.