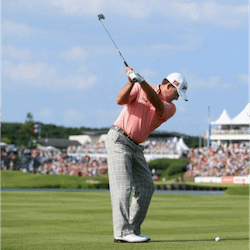 The Open de France, continental Europe’s oldest national Open, started at Le Golf National near Paris on Thursday. The course will also be the venue for the 2018 Ryder Cup; the first time France has hosted the biennial championship between the USA and Europe, so the Open de France coverage of the terrain will be of interest to Aussie punters planning a wager next year.

English golfer Paul Waring had the best day on Thursday, carding 64 to finish 7 under. He achieved the score via seven birdies, and as a Result started Day Two at the top of the leaderboard, two shots clear of his nearest rivals.

Waring Playing under a Medical Extension

A lot of betting fans might be surprised to see Waring topping the table; he has not been very much in evidence in top-tier golf over the past 18 months. In fact, back problems resulted in him starting in just four tournaments last year, so he would not qualify for the Open de France normally.

The same back trouble, however, has allowed Waring to acquire a medical extension, which reduced the number of tournament starts he needed to qualify.

It’s not going to be easy for the English golfer to hang onto the top spot for the final three days. He has more than a dozen rivals breathing down his neck, including his countryman Nathan Kimsey, Swede Alexander Bjork and Thomas Pieters from Belgium. All three finished Round 1 at 5 under par, on 66, so they should be strong challengers in the remaining three rounds.

Tied in fifth position at 4 under were the USA’s Peter Uihlein, German Florian Fritsch, and Engand’s Tommy Fleetwood, who finished fourth at this year’s US Open in Wisconsin. In eighth place on the leaderboard, tied on 3 under, were Kristoffer Broberg and Rikard Karlberg of Sweden, Spain’s Pablo Larrazabal and Adrian Otaegui, France’s Adrien Saddier, Andy Sullivan from England, and South African George Coetzee.