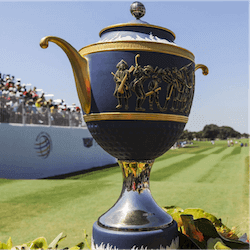 Why the WGC – Mexico Champs doesn’t occupy a better slot in golf’s overall schedule can only be guessed at, but its addition to the World Golf Championship had in many ways put the World back into World Golf Championship, as before its inclusion in the schedule, the only other country that could possibly have been classified as World and not merely the United States, was China, despite the fact that to many, this is one and the same thing.

The move to Mexico had therefore been necessary, encouraging and very overdue. In Mexico, the situation had always been one of being a quite nasty and unforgiving strand of exclusivity. If you were not part of the absolute elite and member of a private club, you simply did not play golf in Mexico. A fact that obviously irked Benjamin Salinas, group CEO of Grupo Salinas.

Salinas spoke recently at the Chapultepec Golf Club, addressing especially this very issue, referring to the pretentious and exclusive nature of the state of participation as being totally unacceptable. For Salinas, bringing the world’s best to Mexico and allowing everyone else in on the game as well, was a matter of pride. The inclusion of children, who had never been exposed to golf as a game or a possibility, was a priority for Salinas. The value that the game has, especially, was something that had to be instilled as far as possible, even more so than involving as many as possible new participants in the game in the country.

Golf Is For Everyone And Always Was

Involving the world’s underdeveloped countries in the game had perhaps not been the main earmark to start with, but the WGC coming to Mexico had now become the unplanned potential model for future international events in the professional world of golf.

And really, it would be easy to question the motivations and even integrity of the players in a situation like this, but in reality its more an issue of a very difficult schedule.

Perhaps it is all about the timing and always was.