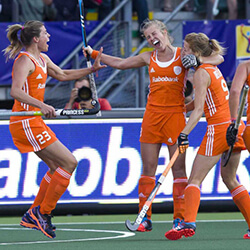 Team Netherlands, the defending champions from last season’s Hockey World Cup managed to score three goals within the first 9 minutes of the opening pool of this year’s tournament. The Netherlands finished off with a 7-0 against South Korea, giving them a solid head start as the bulk of the championship comes underway.

Frederique Matla scored the first goal in the opening minute of the game, which was then followed by two more points, earned by Lideqij Welten and Kitty van Male, giving the Dutch a commanding lead of 3-0.

Matla once again claimed a goal, which was matched by Kelly Jonker, pushing the total score up to a total of 5-0, which was achieved by the 14th minute. Laurien Leurink and Van make added two more points in the final 23 minutes of the match, giving the Netherlands one of the strongest victories so far.

New Zealand beat Belgium 4-2 in the Pool D game, where Belgium’s Jill Boon and Louise Versavel were the only two scorers for the team. After Kelsey Smith’s early 2-point start, Shiloh Gloyn and Olivia Merry took New Zealand to the end in the 32nd and 54th minute respectively, sealing the win for the team.

It was also Italy’s first game at a World Cup in 42 years after they beat rival China 3-0 in Pool A. No. 3-ranked Argentina saw a victory of 6-2 over Spain during the opening match of Pool C.