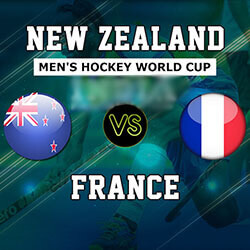 Stephen Jenness and Kane Russell helped their team beat France 2-1 in the Men’s Hockey World Cup 2018. The Blacks Sticks managed to outscore France in their opening game played at the Kalinga Hockey Stadium in Bhubaneswar.

The first quarter saw neither goals scoring at all. The second quarter saw more success for the New Zealand team as Kane Russell took the first in the 17th minute while France failed to convert a number of opportunities in the later stage of the quarter. By half-time, the Black Sticks were leading 1-0.

Once back on the field, a long-pass from midfield was well-executed by Stephen Jenness, who managed to make it all the way to the scoreline to push his team to 2-0 with just four minutes left in play. France, now battling to keep up, claimed their first goal thanks to Victor Charlet, who converted a penalty corner in the 59th minute to change the final score to 2-1.

Despite their victory, many feel that New Zealand needs to tighten their game as both goals they scored were due to two individuals and lapses in France’s defence, rather than a team-based effort. New Zealand will remain in Pool A along with Argentina, who dominated in their latest game against Spain, with a culminated victory of 4-3.

For the Pool B matches, reigning world champions Australia are set to take on Ireland, while England will be taking on the Chinese team.