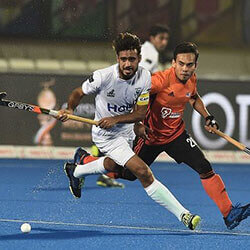 Four-time champions Pakistan played a hard game against Malaysia that ultimately ended in a 1-1 draw for their Pool D match as both teams remained in the hunt for a knock-out round for the Men’s Hockey World Cup.

After being unable to break the deadlock for a time, Pakistan managed to take first blood in the 51st minute thanks to Muhammad Atiq’s field strike, although Malaysia evened the score out some four minutes later when Faizal Saari converted a penalty corner. The encounter that saw world number 13 Pakistan against world number 12 Malaysia meant that they were, for the most part, one of the most evenly matched teams of the pool. Although Malaysia began the match on a brighter note, earning two penalty corners by the third minute, but both were kept at bay by Pakistan.

The draw means that both Malaysia and Pakistan will remain in the fray for the knock-out rounds for their next Pool D encounters, having earned a point each from tow matches.

Germany is currently leading Pool D with six points, followed by Netherlands and then Pakistan, with Malaysia taking up the last spot. Pakistan had previously lost by a single goal to Germany, while Malaysia were dominated by the Netherlands 0-7.

Pakistan will now be facing the Netherlands while Malaysia, who are sitting with a goal difference of minus 7, will have a difficult battle against Germany on the same day leading up the quarter finals.