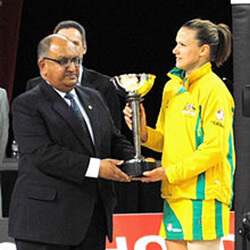 Despite giving some hope to Kiwi netball fans, the Ferns were unable to hold their own against the Australian onslaught, and lost composure throughout the game, making a series of errors that many have called out as being less than professional, especially at an international event.

Noeline Taurua, head coach of the Ferns, has had trouble identifying any positive plays from the team, and explained that there are many individuals on the team that will need to work on their game during the break ahead of the upcoming Quad Series campaign.

The Diamonds came on to the court with a clear direction and kept their pace throughout the opening quarter, leaving their opponents scrambling to keep up. Marla Folau, who had previously netted 40 from 41 goals in their last game, failed to put up a real performance, especially under the pressure of Australian defenders Courtney Bruce and Jo Weston.

The Ferns’ defence unit similarly underperformed, with vice-captain Katrina Grand sent to the bench during the second quarter. And despite the team managing to hold their ground during the final quarter, but the Australian team continued to apply the pressure, and never lost the edge.