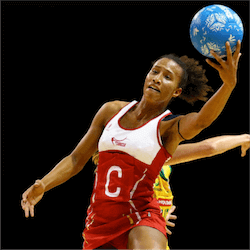 The Silver Ferns are on their way to what they are hoping to be a successful Commonwealth Games. England, however, are threatening to step into the act of being Australia’s newest main rival, a spot previously occupied by New Zealand. England went above and beyond, achieving their best results yet when they finished as runners-up in the last instalment of the Quad Series last month.

They stuck it to New Zealand in a nail-biting 64-57 extra-time finish in London, but lost 50-46 to Australia shortly after. A final round 5 point advantage over South Africa in Johannesburg pushed the English ahead of New Zealand into second place, just behind tournament winners Australia.

Australia have won the bulk of the games played against England, but in the last few games victory was to be had by very small margins indeed. Word on the street is that England may very well be Australia’s biggest threat at the upcoming Commonwealth Games, especially with winning gold at home in mind.

English midcourt player Serena Guthrie warns against this type of thinking and becoming over-confident. The star said that it would be easy to make a deduction concerning the situation based merely on the results at the scoreline, but there was a lot more to New Zealand than that. Guthrie did go on to say that the confidence boost to the English side at having been able to follow so closely behind Australia had been massive. Something that will ultimately serve the team well going into the Commonwealth Games.

Underfire Silver Ferns coach Janine Southby has had to be very bold in the selection process for the Commonwealth Games. Southby just can’t seem to shake the ever-present references to the 4-0 Constellation Cup clean sweep by Australia in October. The Quad Series not having gone exactly as planned hasn’t served her cause either. A nineteen-goal hammering isn’t anyone’s playmate.

Southby’s axe was a merciless one, with players like shooter Maia Wilson, midcourter Whitney Souness and defenders Jane Watson and Phoenix Karaka not having made the cut.

A surprising choice has been the re-selection of Ekenasio, who hasn’t played for the Silver Ferns since October 2016. Ekenasio admitted to believing that the selection-odds were stacked against her, having given birth just 10 months ago.

The build-up to the Commonwealth games will be competing for the Taini Jamison Trophy in Auckland against Malawi, Fiji and Jamaica come March 21st.