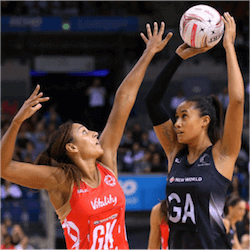 England may have squandered the opportunity to secure a win against New Zealand back in September, but they certainly made up for it now. The England Roses made a complete come-back when they beat New Zealand’s Silver Ferns in a sterling 64-57 extra-time victory in the opening game of netball’s Quad Series.

Head coach Tracey Neville ascribes the win to the Roses having adopted a winning mentality, something that has been long overdue for the team. England goalkeeper Geva Mentor agrees, saying that a negative attitude had been the one thing holding the squad back in the past.

At first, it seemed as if history was going to repeat itself, with England having fallen back to four goals behind New Zealand during the first quarter of the match. They however managed to convince the tide to turn in their favour during the second quarter. Patience and systematically playing the ball in the direction of the shooters paid off big time, putting them in the lead by one goal by the time half time rolled around.

The third quarter brought everything but good tidings and cheer, with England looking as if they were well on their way to falling by the wayside once more as Chelsea Pitman battled to make it past the wall of defence that was New Zealand goalkeeper Temalisi  Fakahokotau.

The final stretch of the game saw New Zealand standing strong and sturdy, leading by an almost unbeatable six goals, especially considering the lateness of the hour. However, England’s coach managed to think on her feet, bringing in queens of defence Beth Coden and Eboni Beckford Chambers. This ultimately made all of the difference to what could potentially have been yet another disappointing outcome for English netball.

To mix things up just a bit more, shooter Corbin struggled to find the net for the goal that would have sealed the deal for England within normal playing time. Lucky for England, New Zealand lagged behind in every which way, apparently completely confused by the restraints of time.

Steering the ball into their attacking end didn’t seem very high up on the agenda for the Silver Ferns, and subsequently the game ended up going into extra time. Serena Guthrie seized the opportunity and played the ball all the way home for the English side.

The loss against England means that New Zealand must now break the curse of their longest losing streak to date – six games in a row.