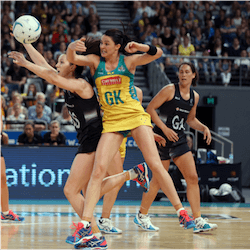 Silver Ferns coach Janine Southby doesn’t seem to be given to any unrealistic suppositions ahead of the cream of New Zealand’s netball crop going up against Australia during this month’s Netball Constellation Cup.  Citing poor off-court management resulting in overall fatigue as the main culprit responsible for last year’s poor performance, Southby has resolved that fatigue will not be a problem during this year’s event.

The gruelling event will see New Zealand play 4 tests in 10 days with travel in both New Zealand as well as Australia in between to boot.  Southby believes that this was the very devil in the details the last time round and has said that the focus of this year’s training had been shifted from on-court training to a more holistic approach to the strenuous Constellation Cup schedule.

Quoting the very popular theory of what constitutes insanity, Southby went on to say that the terrible folly of doing the same things over and over again and expecting a different set of results would not be repeated.

To add insult to injury, the Silver Ferns may very well have to charter some unknown waters during this year’s tournament as a result of a number of positional shortages.  The centre and goal defence positions seem to be weighing heavily on Southby’s mind and facing the season head-on with a brand spanking new-look squad has a decided down-side: a lack of back-up for the two key positions in any squad’s forte.

Kayla Cullen remains the firm favourite to stand in at goal defence should the need arise, but Southby remains overly mindful of the fact that Cullen needs to get back to optimum fitness levels after being absent from play as a result of a knee injury.

Speaking to the press, Southby said that it was vital not to push people into a situation where they had to face more than what they could handle – despite the dire nature of the circumstances at hand.  If the need did arise for trying out new combinations once the tournament had commenced, then the challenges posed by a very precarious situation would have to be faced head-on.

Until then, it would be business as usual.

More Of The Same For The Diamonds

The Diamonds have their own set of defence woes to account for with the absence of Sharni Layton who is still currently still on a time-out.  Julie Corletto has been roped in and the hope is that the formerly retired queen of the defensive will be able to breathe new life into the listless body that is Australian resistance.