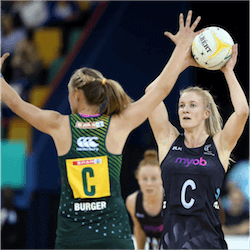 New Zealand’s Silver Ferns are in utter disarray once more after having been beaten by Australia in a continuing dominance stint in netball’s Quad Series. The thumping comes at a particularly bad time for the New Zealand squad, with the Commonwealth Games a mere 10 weeks away.

The Diamonds re-claimed their Quad Series title by hammering the Silver Ferns 67-48 in South Africa on Monday  (Sunday, South African time). Australia’s victory now makes for a five in a row against New Zealand’s national netball team. What’s worse, the Diamonds have won 10 out of the 12 contests played against New Zealand over the past two years.

Heading Into The Commonwealth Games

Silver Ferns coach Janine Southby now has a mammoth task before her, having to name her 12-squad team set to head for the Commonwealth Games in April. What’s worse, she seems to be fresh out of options as there isn’t exactly an army of potential talent knocking down her door to replace the dead wood in the team.

Many mistakes were made during the first half of the match against Australia, with New Zealand having turned the ball over into the hands of the opposition a total of 19 times. This forced Southby’s hand into making a desperate push at substitutions in an attempt to stop the Aussies in their tracks.

The Silver Ferns were obviously tired and demotivated and the players appeared to be disinterested for most of the game. The apparently poor attitude has been the topic of many hot conversations over the past few months, which has obviously yielded no results in the way of finding a solution.

It’s Never Been Quite This Bad

Since netball became an instalment in the Commonwealth Games back in 1998, New Zealand has consistently managed to finish in first or second place. Now, looking back at the Quad Series and last year’s Constellation Cup, it will be a push to expect a third-place result.

Matches have been plagued by poor starts and careless passes on attack and the team has become notorious for having a losing attitude. Quite disturbingly, this has been the prevailing situation for much of the period during which Southby has been in charge.

Quite telling too is the fact that England have now beaten the Silver Ferns three times in the past six months. Previously, England had only reigned victorious over New Zealand for a total of four times during the scope of their competitive history.

The current English team is admittedly in top form and the best combination of players that the Roses has ever had, but it still does not bode well for New Zealand.