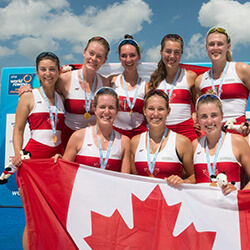 Two Canadian crews have won heats during the second day of the 2018 World Rowing Championships that are being held at Plovdiv, Bulgaria. Gabrielle Smith of Unionville, and Andrea Proske of Victoria both won their respective heats in the women’s double sculls. Carling Zeeman of Cambridge, Ontario, came first in a women’s single heat a day earlier.

Both Smith and Proske have recently come off a silver medal-winning performance at the World Cup Lucerne earlier in June. Their time at Plovdiv is their debut into the world championships, and they are now set to move on to the semi-finals. Zeeman, who also participated in the World Cup Lucerne, walked away with bronze.

Proske, talking to reporters after the heats, explained that the team had increased their training time since Lucerne, which she believes helped build their relationship and trust as a team.

The Canadian Para PR3 mixed four team of Victoria Nolan, Andrew Todd, Bayleigh Hopper, and Kyle Fredrickson and coxswain Laura Court finished in second place in their heat, and will moving on to a repêchage.

Jeremy Hall will also be moving on to a repêchage after he finished in third place in the PR2 men’s single heat.

In the women’s four, Keren Lefrud, Kendra Wells, Jessie Loutit, and Larissa Webicki crossed the finish line in fourth place, and will be moving on to a repêchage. The repêchage will give them a chance to qualify for a spot in the finals.