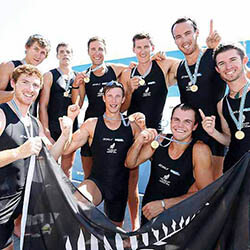 New Zealand’s women’s eight are flourishing at the rowing world championships, but their male counterparts are in risk of losing the Olympics in Tokyo. After comfortably winning their heats in Linz, Austria, the women’s eight, featuring Ella Greenslade, Emma Dyke, Lucy Spoors, Kelsey Bevan, Grace Prendergast, Kerri Gowler, Beth Ross, Jackie Gowler, and coxswain Caleb Shepherd, will be finishing in A for the final.

It’s the reverse end of the spectrum for the eight skilled Kiwi men who have been underperforming and facing the possibility of not qualifying for next year’s Olympics. For the eight, qualifying is extremely tough: only five automatic positions are accessible for Tokyo at the women’s and men’s rowing world championships. The men’s eight, including Mahe Drysdale, Hamish Bond, James Lassche, Shaun Kirkham, Brook Robertson, Phillip Wilson, Matt MacDonald, Stephen Jones, and coxswain Sam Bosworth, fought hard in their latest heat, placing fourth of the five crews at 5.35.730.

New Zealand’s eight men qualified for the final at the 2016 Rio Olympics, where they finished last of the six crews, but could struggle to get to the heats at the Olympics with their current form. The four Kiwi women’s (Davina Waddy, Kelsi Walters, Eve Macfarlane and Phoebe Spoors) put themselves first in the repechage and move on to the semi-final A / B. New Zealand boats have advanced to one A final, three A / B semi-finals and eight quarterfinals after their third day of competing.