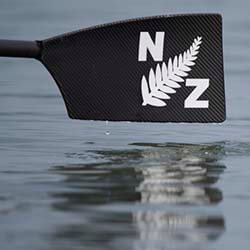 While uncertainty over the Olympic Games in Tokyo continues to rise, New Zealand’s rowing eight is officially off to Japan and, hopefully, an Olympic medal too.

The rowing hopefuls on Sunday evening (NZ time), while only needing a place among the top two from a field of four in the Olympic qualifying regatta in Lucerne, Switzerland, won their event, thereby booking their spot for the Games. The crew on Sunday night headed home European Rowing Championships silver medalists Romania by 1.19 seconds in their drive for an Olympic berth.

Sunday’s race was a good one, said rowing eight member Matt MacDonald after the event. Though a steep pace right from the start, MacDonald said every member of the crew had been more than willing to throw their full weight behind Olympic qualification.

Also competing in New Zealand’s field of four had been Italy and China, with Italy nearly seven more seconds off qualifying at third, and China fourth.

Also seen qualifying for the upcoming Olympic Games on Sunday were Ireland’s women’s team. The women’s four team comfortably qualified for a record fifth boat for the Olympic regatta this year. So stellar had the foursome’s performance been on the weekend, that they absolutely dominated the event on Sunday, while finishing their qualifying push with nearly three seconds to spare over their Chinese opponents, who finished in second place.

From the women’s contention, the top three boats in the final secured Tokyo-qualification.

While uncertainty about this year’s Games continues to rise, the IOC has insisted that Tokyo 2020 remains on track to start July 23.