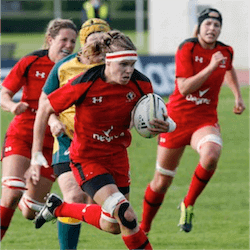 August 17 saw England defeating the US 47 – 26, effectively becoming the second team, after New Zealand, to secure a place in the semi-finals.  The former world title holders are well on course to retain their title.

The first quarter of the match saw an impenetrable English defence foiling every valiant effort by the US to make their way into England’s half of the field.  Almost at half-time, the US became seemingly agitated at the turn of events, pressing them to focus on holding on to and running the ball.  England however, stepped up its defence after a close call involving Danielle Waterman and a ball that got away.  Their efforts were well-rewarded, with half-time drawing to a close at 33-7 in England’s favour.

American fullback Cheta Emba sought to correct the matters at hand and was partially successful – running the ball from the very back of the ruck and diving at it in the end, pushing the score up to a less shameful 47-12.  Emba had instigated an attempted revolution, with the US picking up the tempo and pushing the score to 47-26.

Time was however already enemy no. 1, and the Americans were unable to successfully chase the Roses all the way to the post.  47-26 was the final outcome of the match between two rivals.  A sore loss for the US no doubt, with the Americans having beaten the English in the very first Women’s Rugby World Cup ever, back in 1991.

It has been a bitter battle between rivals ever since.

England had shown the prowess and dedication right from the start, having scored no less than ten tries against both Spain and Italy, before going head to head with the US.  The match against the US was a victory for team and country, but also a personal one for Outside Centre Scarratt, who had turned the match into a personal best by beating Fly Half McLean to become England’s newest leading points scorer of all time.

What To Expect Next

The World Cup now moves on to Belfast for the play-offs – with England going head to head with the team to finish in third position in the overall rankings.

All of the remaining teams in the competition will play two more games based on their ranking.

The final match of the tournament will be played at the Kingspan Stadium.