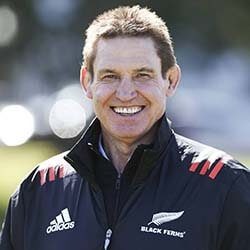 Black Ferns coach Glenn Moore has at long last broken his silence following serious allegations made by Te Kura Ngata-Aerengamate. According to the player, she had suffered a serious mental breakdown as a direct result of comments made by Moore during last moth’s norther tour.

Ngata-Aerengamate’s allegations include that of Moore having questioned her value in terms of being a Black Ferns player. Moore reportedly also told her in front of her teammates how she had been picked to “play the guitar” instead of sport.

An independent panel has now been appointed in order to oversee a cultural and environmental inquiry into the Black Ferns. New Zealand Rugby (NZR) officials appear to be viewing the allegations made against Moore in a serious light.

Moore this week said he “welcomed” the upcoming inquiry and review process. He said that he regards his role as head coach of the Black Ferns to include prioritising the overall well-being of everyone on the team – including their mental well-being. He also revealed in his statement how he remains committed to cooperate with every aspect of the review in order to a positive outcome to be achieved for the entire team – coaches and management included.

The statement furthermore emphasised that Moore would not be issuing any more comments until such time as the review has been finalised.

According to NZR, the review should be finalised by at least the end of February. Chief executive Mark Robinson has said the review will be handled separately to the usual post-season campaign review.