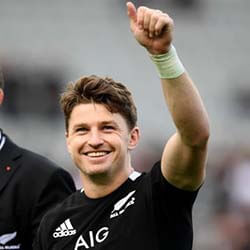 Beauden Barrett, player for the All Blacks, was able to achieve one of his dreams by meeting sporting icon Neymar after New Zealand lost to France in their most recent rugby test. Both players wear No. 10 on their jerseys, although Barrett had decided to don a blazer for the occasion as he had been on the list of injured players. The test game was won by France 40 – 25 and was played at the Stade de France.

Neymar – widely considered by many to be one of the greatest football players of all time – had been playing for Paris Saint-Germain, who were able to achieve victory while playing against Nantes for 3-1 during their French League event that was set at Parc des Princess. After the match was complete, he sped across the city in order to get to the rugby test match. During the meeting, Neymar and Barrett swapped their jerseys in the rugby stadium, while the football star also offered a PSG third tunic that he had autographed, chosen due to the fact that it’s almost totally black and looks similar to the jersey used by the All Blacks.

A video that was released by the All Blacks showed Barrett leaving the encounter, which he had described as buzzy. He explained that he had been feeling down to the fact that his team had lost their most recent match, but that his meeting with Neymar had perked him up a bit.