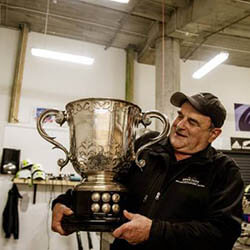 A rugby trophy nearly a century old, and one mysteriously gone missing in 1932, has after all this time eventually been found – thereby solving one of New Zealand’s oldest rugby mysteries.

Rugby’s A Loving Cup, a trophy traditionally awarded to the winners of one of the country’s longest-in-existence rugby union fixtures, namely the annual North v South game, has been found buried deep in the underbelly of Eden Park.

The man who went on a hunt for and discovered the trophy after having become aware of its significance following an article published about an amateur historian’s search for the missing cup, is Eden Park facilities assistance Michael Brown. He had been aware of the cup being in storage at Eden Park, said Brown after he reported the find, but wasn’t aware of its importance or that this was in fact the one and the same trophy to have gone missing all those many years ago.

Since the Eden Park team knew the exact whereabouts of the Ranfurly Shield, the Rugby World Cups, and the Bledisloe Cups, Brown says no one at the facility had ever really given the trophy as much as a second thought. As such, it had eventually simply fallen through the cracks.

The fact that the cup and the base appeared to be two parts of two different trophies, said Brown, only served to cause even more confusion. It had only been after amateur historian Ian St George’s article came to the attention of Brown, that the team at long last managed to put two and two together.

Brown now says he hopes the trophy can soon, for the first time in many decades, again be awarded in a North vs. South game.