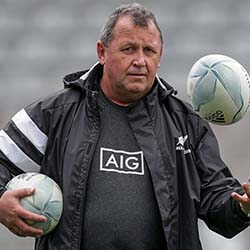 New Zealand coach Ian Foster says the lack of creative solutions available to sports teams looking to enter the country while the global health crisis drags on is nothing short of lamentable. The All Blacks coach described the situation as an ongoing frustration.

Foster voiced his opinion on the back of an anticipated eight-week suspension of the travel bubble between New Zealand and Australia. In the event the Aus-NZ bubble gets extended further than the expected eight weeks, the Kiwis will go from hosting six upcoming games to only two – with both stunts against the Wallabies.

The All Blacks coach expressed disappointment and surprise at the fact that after a year of dealing with a single, ongoing situation, no creative solution has been identified for making more regular interaction happen between sports teams from different countries.

Foster furthermore bemoaned the change of plan regarding a planned 15-game Rugby Championship stint that would have seen the All Blacks play at least nine games on home soil – while adding that NZ rugby isn’t the first business to have to come up with a Plan “B”. Now that the travel bubble between New Zealand and Australia has been suspended, Australia once again appears set to become the main host for the bulk of the games set to be played this year.

The All Blacks have in the meantime started receiving their first vaccinations. Foster said on Thursday all members of the squad were on board with getting their jabs.