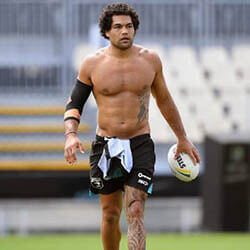 Warriors forward Adam Blair, despite currently bearing the brunt of some pretty heavy criticism voiced by interim coach Todd Payten, says he remains confident in his own ability of “having something more to offer”. Whether or not whatever it is that the prop has in mind will be displayed whilst playing for the Warriors remains very much up in the air.

Although Blair has the option of continuing to play for the Warriors at least for the 2021 season, speculation over a request by team management that Blair either retire or “move on” at the end of the year, is running rife.

Blair appears to have completely closed the book on any possible future moves made to the UK Super League, but has indicated that he remains very much in favour of joining a different NRL club in the event that he doesn’t get to pull a Warriors jersey over his head come next year.

The prop seems intent on simply enjoying, as he so eloquently words the phrase, “what’s left” of his pro-career. And enjoying what’s left doesn’t seem to be connected exclusively to playing for the Warriors only. Intent to make the most of a three-year period he had hoped was going to be “his time”, Blair has declared himself unwilling to rule out anything as a no-go.