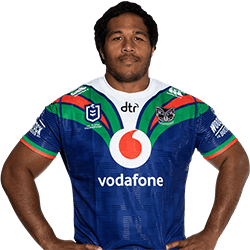 Top prop Aganatius Paasi has confirmed that he won’t be staying on with the Warriors for another season. Instead, subject to his getting the necessary visa, he’ll be joining Super League club St. Helens. Since the Warriors prop has played in at least half of all Warriors games played over the course of the past couple of seasons, he shouldn’t encounter any difficulties securing a visa for himself and his family.

His would in any event probably have been a struggle for Warriors game time come next season – especially with incoming coach Nathan Brown basically having his pick of the crop as far as forwards go. This after the club signed Addin Fonua Blake a little over a week ago. And before him, the talents of Ben Murdoch-Masila and Kane Evans.

Despite Paasi having last season being one of the best players in the squad and a regular starting prop, the club doesn’t appear too bothered by his intended departure. This probably has much to do with this year’s early-season ankle injury and the fact that he ultimately ended up playing a squeamish total of only 6 games for the side.

Paasi’s departure will definitely result in especially pay flexibility for recruitment and development manager Peter O’Sullivan. Chances are he’ll be scouting to see which players he’s able to pick up once all the current-season NRL departures have been announced. Since Adam Blair too won’t be making use of his option to stay on for another season, O’Sullivan will be looking to fill at least 2 spots in next year’s squad.