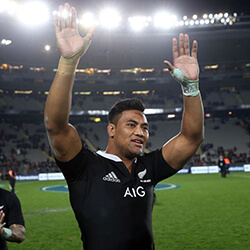 Scrumhalf TJ Perenara became the leading man for the All Blacks as he managed to score a try in both halves of their game against Argentina. Argentina, who had put the pressure on the All Blacks throughout the first half of the game, saw the All Blacks come together toward the end with two late tries, where the bested Argentina 46-24 at Trafalgar Park in Nelson.

Perenara, who was given a surprise start, made a try-saving tackle on Matias Moroni, and managed to clear up a loose ball in the goal area as the New Zealanders were under constant pressure from the Pumas. Winger Nehe Milder-Skudder, Channon Frizell, Jackgoodhue, and captain Kieran Read all scored for the home team, who also saw lock Brodie Reallick and inside centre Ngani Laumape receive injuries relatively early into the game.

Fly-half Nicolas Sanchez earned his own try and ended with 14 points to cross the line of 655 in his career, surpassing Felope Contepomi as his country’s best test scorer, while full-back Emiliano Boffello and Ramiro Moyano scored tries of their own.

Read, in a statement to reporters after the match, explained that the Pumas really “brought it to us today,” but that the team had expected it. Their victory over Argentina marks the third win for the match in the Rugby Championship so far, after consecutive wins over long-time rivals Australia.

Despite their loss by such a wide margin, the Pumas put up a strong game, and put intense pressure on the All Blacks throughout.