All Blacks Defeat Against South Africa 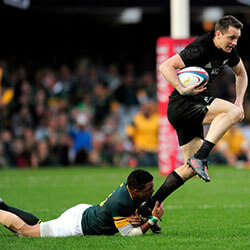 The All Blacks have been on a hot streak this last season, winning every game consecutively time and time again. But their latest defeat has offered up a glimmer of hope for those that hope to take the Webb Ellis Cup away from the New Zealand in the next Rugby World Cup, set to take place in Japan.

The Springboks’ 36-33 win in Wellington ended a 15-match win streak for the All Blacks, who have been dominating the world rugby scene since winning the World Cup title in 2015 during their time in England. Apart from their 24-21 defeat against the Irish Lions and Britain in 2017, their latest game against South Africa is their first defeat on home ground since 2009.

With the Rugby World Cup now just a year away, the defeat has been seen as evidence that the All Blacks are not indestructible, and it’s enough to offer the first signs of hope for those teams that have been dominated for so long by New Zealand.

South Africa’s win came thanks to their focus on a physically strong defence, which seemed to offer the upper hand against the All Blacks, a team that is known for their attack-minded strategies.

Their strongest opponents at the moment for the Rugby World Cup will be second-ranked team Ireland, along with England, who will undoubtedly be New Zealand’s strongest rivals, and now possibly South Africa, but Australia still stands a fighting chance.