All Blacks Win Against The Springboks 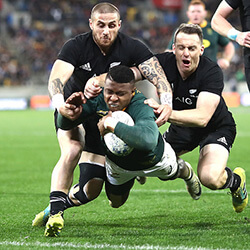 Ardie Savea’s late try pushed the All Blacks to the hard-earned 32-30 victory over the Springboks in their Rugby Championship Test that took place in Pretoria.

The match, which was tightly contested, and was the chance for the All Blacks to earn back their title as the world championships after the Springboks defeated them in Wellington.

The Springboks dominated the game early on, but two Handre Pollard penalties pushed them further back as the All Blacks countered with two penalties of their own from Beauden Barrett, which saw the game sit at 6-6 at half time. South Africa focused on their attack after half time, and they eventually took the lead 30-13 by the 70th minute mark. The All Blacks changed up their form toward the end of the game, and managed to earn another 19 tries during the final quarter.

Many feel that the All Blacks were not on point for most of the game, and that the Springboks’ domination of much of the field was attested to that fact. It was a late comeback for the All Blacks, and one that could have easily been missed had they not pulled out all the stops.

The All Blacks spent the last 10 minutes in South Africa’s half, and just before full-time, Ardie Savea managed to push through a mass of competition, and with the aid of Mo’unger, he claimed the last try of the game and earned the win for his team much to everyone’s disbelief.