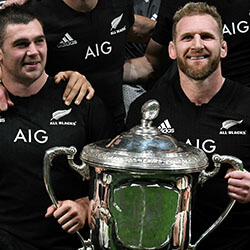 The All Blacks ended the Bledisloe series with a sweeping victory over the Wallabies 37 – 20 at Yokohama in Japan, which is the future venue for the 2019 Rugby World Cup.

Australia, who were eager to prove themselves after a difficult season, went on to the stadium amid a cheering crowd of 40000, and almost saw their first try come in at the second minute, but their luck didn’t last long.

Captain Kieran Read and flanker Liam Squire gave the All Blacks a leading position not long before the first break, and the world champions continued to added on the pressure as they claimed more points, which only worsened for the Australian team toward the end of the game.

Hooker Tolu Latu, playing as a replacement for Australia, was sin binned for a strike against All Blacks counterpart Codie Taylor during the 66th minute, and tries from Rieko Ioane and Ben Smith pushed the team to finish the game on top.

New Zealand coach Steve Hansen told reporters afterwards that it was a good start to the team’s tour, who are getting ready to take on Japan before flying out to Europe for their November Tests. New Zealand had claimed the wins for the previous Bledisloe Cups earlier this year in August, which assured them their 16th victory in the series so far. It’s also marked as their 9th win over their Australian rivals, who they’ve beaten for 12 years in a row.