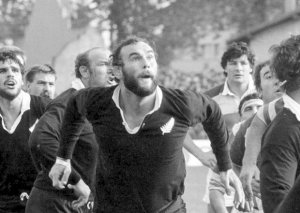 A family spokesperson to close relatives of All Blacks rugby great Andy Haden has confirmed that the veteran rugby legend is currently battling a grave illness at his home. The family expressed the wish that Haden as well as their privacy be respected during the difficult time now facing the sports legend. They were however willing to say that Haden was recently sent home after a time spent hospitalised for palliative care.

Haden’s health recently took a turn for the worse, the spokesperson confirmed. The rugby veteran in 2013 announced having been diagnosed with chronic lymphocytic leukaemia and has been receiving treatment ever since.

Not only did Andy Haden play more than 100 games for Australia, but he also appeared in more games even than that playing for Auckland. He played provincially for Auckland while playing club rugby for Ponsonby.

His very first appearance as part of the All Blacks was at the age of only 21. This was during a 1972 tour against New York Metropolitan, played that year in New York. Five more years would pass before Haden would eventually make his test debut as a star All Blacks force to be reckoned with against the Lions.

Haden eventually in 1985 played his final test as a member of the All Blacks before retiring from pro-rugby the following year (1986).

The Andy Haden of those years is fondly remembered by many as having been outspoken in his approach, but also at the same time a superbly progressive force in terms of rallies and push-motions related to player payments.