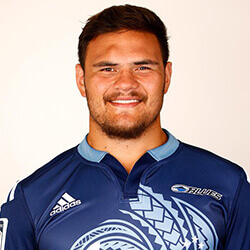 Angus Ta’avao was emotional after he was called to become part of the All Blacks team for the rest of the Rugby Championship, but the move has highlighted the strain that has been mounting due to the number of injuries that top-level props have been receiving this season.

Ta’avao was been officially become part of the All Blacks team after Joe Moody was forced to take a leave of absence due to a broken thumb. 28-year-old Ta’avao is one of two that did not start the current season with a Super Rugby contract but has seen elevation to a national position for the Rugby Championships. Prop Karl Tu’inukuafe was the first to be drafted without a contract during their June series against France.

Ta’avao told reporters that he shed a few tears when he heard the announcement, and that the last few days for him were pretty big. He further explained that he was only meant to play with the Chiefs until the end of January, and had not considered that he would be playing at a more professional level.

Ta’avao, who was used primarily as a bench player for the Auckland Blues, was never really in the roster for the All Blacks, and moved to Sydney for this reason. He then returned to New Zealand for the 2017 season, and his career finally took off again when the Chiefs lost six of their original props due to long-term injuries.