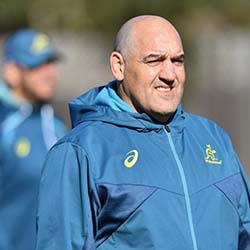 Argentina head coach Mario Ledesma on Saturday voiced extreme unhappiness on behalf of his team after the Argentinian Rugby Championship side got left out of the captain’s photoshoot in Townsville. Ledesma in a post-game conference delivered an unexpected message: one of reacting to a situation he said he deemed disrespectful.

Ledesma during his rant over being left out without as much as a word of explanation or apology, said Argentina never asked for much, and that they haven’t played as much as a single game at home in over two years. Even so, they never complained about anything, he said. He clearly felt that the photo shoot should have been postponed pending the team’s arrival in Townsville.

Friday’s photo shoot meant to promote a double-header of rugby action a day later. According to Ledesma, the team had spent three weeks rotating in a one-hour radius for making it to the picture – only to be stuck 1,400km away and miss out on the event in anyway. He said he wasn’t sure whether the decision to proceed with the picture had been taken by Sanzaar or by Rugby Australia, but that being excluded without as much as a word or a comment had hurt a lot.