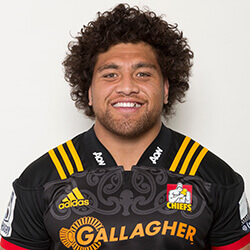 Atu Moli’s 2018 Super Rugby season was cut short following an injury in the season opener last February. Playing for the All Blacks against the Crusaders, he sustained an injury to his left leg that has kept him out of the sport until now. However, he was back as Chiefs prop in a match against the Blues in Kaikohe on Saturday, 2 February 2019.

The injury came just as Moli’s star was in its ascendency, following his 2017 breakout year with the Chiefs. The damage to his leg led to a painful haematoma. An abnormal mass of blood outside of a blood vessel, in his quadrilateral muscle.

Treatment required 4 separate operations and months of recuperation, but Moli feels that he is finally back on track. After months of fearing for his Rugby future, and even having to consider the worst-case scenario of amputation, this comes as a relief for the athlete.

The 23-year-old told Radio Sport he was “hungry” to get back on the field, and described the feeling of playing again as “awesome”. He had wanted to return in time to play in the Mitre 10 Cup, but his road to recovery was a little too long for that to be possible.

Now, however, Moli seems more confident and committed than ever. At the same time, he is focusing on staying in the present, enjoying the games he is playing and avoiding looking too far into the future. He is set to play more minutes in upcoming matches, and is likely to clinch the No.1 jersey with the chiefs.