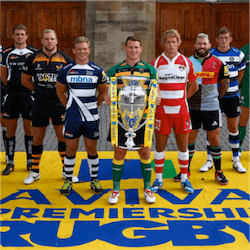 After what seemed like longer a wait than usual, the time as finally arrived – the AVIVA Rugby Premiership kicks off on the weekend of September 1st.  Luke Pearce has been nominated chief in charge for the match between Bath and the Leicester Tigers on September 3rd – one of the most anticipated games of the season.

The 2017 AVIVA Rugby Premiership marks the 125th season of the Premiership event at Welford Road.

Transfer Story Of The Year

Bath will be entering the 2017 AVIVA Rugby Premiership with a notably strong pack of players.  There has even been swopping of sides going in the Bath / Tigers dynamic, with George Ford having left the ranks of Bath for Leicester, and Freddie Burns doing the opposite.  Burns will most certainly be feeling the brunt of having to live up to the legend that is Ford and will probably be looking to be tested and found worthy.

This year the Tigers will be joining the competition equipped with basically an all-new backline, with George Ford, Jonny May, Manu Tuilagi and Matt Toomua.  Assuming that the combination clicks into place, Bath will most certainly be given a run for their money.

The Tigers have not been champions since 2013 and will be looking to prove a point.

Newcastle Falcons and Worcester Warriors are up first.  A number of Warriors will be looking to make a stellar return to premiership rugby and feature in the opening match.  Fullback Chris Pennell, props Nick Schonert and hooker Niall Annett will all be making a return after having recovered from various injuries.

Director Gary Gold said that it would be basically the same side who led Munster at half-time, only to concede three converted tries later on.  Gold seemed notably relieved that no Warriors player had been compromised in the Munster game, due to injury or otherwise.

The Warriors have won four of five recent meetings against the Newcastle Falcons.

New signings Jason Woodward and Ruan Ackermann could very well play their debuts for Gloucester on opening day of the AVIVA Premiership season.  Woodward – over from Bristol –  has not been able to a part of Bristol’s pre-season fixtures as a result of a hamstring injury.  Whether Woodward will be fit and ready to compete on September 1st is as yet still undecided, but coach Johan Ackermann said that it looked like a positive.

Reigning AVIVA Premiership champions Exeter Chiefs have been warned that a poor start would tarnish the premiership opening day.

The Wasps topped the 2016 AVIVA charts, pressing on into the final and suffering an extra-time loss at the hands of Exeter Chiefs.

The Harlequins have lost only one out of twelve previous encounters with London Irish in all competitions.  The London Irish have been advised to summon the underdog spirit – something that has been synonymous with the club’s past – if they are to have any hopes of beating the Harlequins on September 2nd.

The underdog spirit is believed to have forged a sense of togetherness between players and coaches.  Here’s hoping that sheer determination will prove to be enough.