Bledisloe A Priority For Castle’s Wallabies 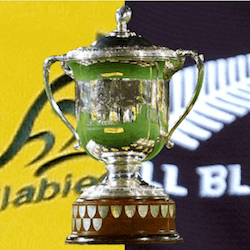 Bledisloe A Priority For Wallabies

Winning the Bledisloe Cup is a priority. These are the words of Australian-born, New Zealand-raised Rugby Australia CEO Raelene Castle. Castle made it very clear on Wednesday what her priorities were for the year, saying that no Wallabies season would be considered truly successful until such time as Australia had beaten the All Blacks to the post.

Passionate words from Castle on the same day that it was announced that the third Bledisloe Test would this year be played in Yokohama in Japan, come October 27th. The opening two tests will, as per tradition, still be played in Sydney and Auckland.

This year its New Zealand’s turn to stage two of the three Bledisloe internationals. They opted for Japan as their location of choice. The All Blacks will play against the Wallabies in Japan, before playing Japan’s national side, the Brave Blossoms, in Tokyo a week later on November 3rd.

The All Blacks and the Wallabies are both starting to set their sights on next year’s Rugby World Cup, which will be played in Japan. As such the Wallabies’ match strategies are a high point of conversation at the moment. Castle is confident that not too many eventualities will have to be catered for and that Australia has finally started to move away from jumping from one combination to the next, hoping to eventually happen upon something that actually works.

Castle recently met with Wallabies coach Michael Cheika and has said that there wasn’t any need to discuss at length his recent behaviour at Twickenham during the England test, when Cheika lashed out at match officials, referring to them as “f..cking cheats”.

Castle said that she felt that there had been sufficient reflection from Cheika’s side about what had happened and that there was no need to revisit the incident yet again. Cheika realised that despite the fact that he wanted to react emotionally and full-on energised, he also recognised that his actions had ramifications and that everything that he did came at a cost.

Castle made it clear that she supported Cheika and that she believed that he would always be looking to partner with Rugby Australia in fighting the good fight for the good of Australian rugby.

Going forward, one common goal will be on the table: reclaiming the Bledisloe after 15 years in the hands of New Zealand. If any dynamic is up to the challenge of making that happen, then it’s the one of Cheika and Castle.