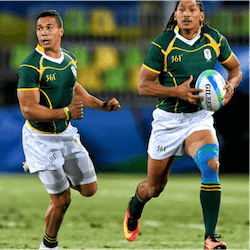 South Africa’s Blitzboks are excited beyond measure after having beaten New Zealand in the Dubai Sevens final on Saturday. The Blitzboks have been doing everything right that the country’s national side, the  Springboks have been doing wrong.  Having outlasted the sweltering dessert heat of Dubai, the Blitzboks stuck it to Fiji in a very tight 12-7 semi-finals match, whilst New Zealand in turn triumphed over England in a 14-5 outcome.

The two Sevens champions had not gone head to head since the 2015/2016 World Series final, which was won by New Zealand.

South Africa showed sterling defence during the semi-final against Fiji and the winning margin might have been even bigger had they managed to get out of the starting blocks a little earlier on in the game.  Nevertheless, they ultimately crashed over Fiji with a lot of help from Cecil Afrika and Seabelo Senatla.

Fiji did manage to score a try during the very last of it but it was a matter of too little too late for the Fijians as the Blitzboks’ defence proved to be impenetrable.

The final saw more of the same, with South Africa outplaying the Kiwi side 24-12.  Springbok captain Philip Snyman seemed well pleased with the outcome, saying that this was the start to the Sevens Series that South Africa had been hoping for.

Speaking to the press, Snyman said that it had been evident in the past that a good result in Dubai always proved valuable later on the Sevens Series and that it served to provide the team with the momentum that was so necessary in order to keep on doing well throughout.  He said that the team were looking especially looking forward to playing in Cape Town come next weekend as this was their home crowd and would make for a very special celebration in the event of a victory for the South African side.

South Africa will be facing Russia, France and Kenya in Cape Town on the weekend.

It really is a tale of a kingdom divided – on the one hand South Africa’s Springboks trying to make a dent in what seems like a mountain made of solid steel, on the other hand South Africa’s rugby pride and team of the year: the Sevens Series Blitzboks.

It seems as if everything that the Blitzboks touch turns to gold and revolutionises the world of sport and rugby in general.

The two entities hail from the same country but are worlds removed.  This is the true parody in the world of South African rugby.