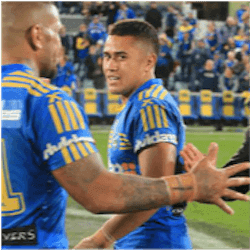 Brad Arthur – The Good, The Bad, The Ugly

Parramatta Eels had only just recovered from a time’s worth of salary scandals before having been hurled into the – some say – incapable hands of coach Brad Arthur.  Arthur took on the Eels in 2014, a year which saw a multitude of feel-good stories emerge from the ranks of Eels fans, the most famous perhaps that of Arthur having insisted on continuing to coach his son’s junior Football team, despite his latest appointment.

Whatever Arthur’s motivation for still coaching his son’s Footy team 3 years onwards, he certainly has managed to work magic with the likes of players like Mitchell Moses.  Moses has become the centre-point of Parramatta’s defence structure – a move that has prompted the player to defend in a completely different way than what he has been since joining the club.

Whether it’s a junior Footy squad or an international squad – in the end it comes back down to one thing only: coaching.

The notion that Parramatta Eels would host North Queensland in a semi-final would have been deemed nothing short of preposterous a couple of months ago.  After all, the Eels had failed to qualify for the finals every year since 2009.  The ghosts of the past seemed to haunt everyone but the Eels themselves as they faced Melbourne last week – eventually fighting their way up to only 2 points short of the premiership favourites.  The stellar performance against Melbourne is bound to make for a considerable confidence boost for the Eels ahead of Saturday’s stand-off with the North Queensland Cowboys.

The Eels are bound to look for long-awaited revenge as they ready for the very first battle against the Cowboys since having suffered a 29-0 defeat at the hands of the opponents back in 2005 during the preliminary final.

Cowboys Hanging In The Balance

The Cowboys will have to make a strong start against Parramatta Eels if they are to keep their final hopes alive.  Failure to do so may very well result in a repeat of their 2016 nightmare when failure to perform well from the onset resulted in them falling by the wayside at the last minute.  They will also be contending with an over-confident Eels side on the back of their almost playing catch up with Melbourne during last week’s match.  This, coupled with the cheers from a home crowd, might very well be all that’s needed to extent the Eels’ premiership hopes by yet another week.