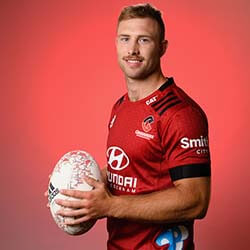 All Blacks midfielder Braydon Ennor who had previously been announced as part of the 36-man squad to take on Tonga and Fiji next month will no longer be able to play. He has had to have an appendectomy and will need the time to recover from the surgery which is said to take up to five weeks.

While Ennor started his career on the wing, he made the move to midfielder last year when he joined the Crusaders. Despite it being a modest season due to his knee injury, his performance was impressive enough to have him added to the All-Blacks team this year.

To date, Ennor has only played one game for the team back in 2019 against Argentina in Buenos Aires. The team won the match 20-16. He was a contender to play in last year’s test programme but injured his knee during the North versus South match and was unable to play for the team as a result.

A replacement is yet to be named and unless coach Ian Foster manages to call in a replacement, he will have to choose between Quinn Tupaea, Rieko Ioane, and David Havili for the game against Tonga next weekend.

Another player named for the squad but unable to play next week is Anton Lienert-Brown who is currently recovering from an elbow injury. If a replacement is not selected, Foster will more than likely ask Leicester Fainga’anuku to play.