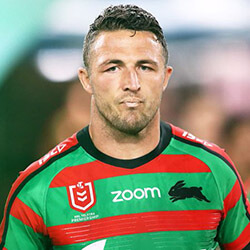 The potentially reputation-ruining allegations brought against Sam Burgess and the South Sydney Rabbitohs are all part of a devious plan orchestrated by the former team skipper’s ex-wife, a presiding court has heard.

The allegations of drug abuse and domestic violence levied against Burgess has been described by his lawyer to be the work of “orchestrated propaganda” with damaging retaliation being the intended outcome.

The allegations made by Phoebe Burgess was during Wednesday’s Moss Vale Local Court session described by lawyer Bryan Wrench as of a very serious nature – and what’s more, allegations “sprung” on the former Rabbitoh’s captain’s legal team. According to Wrench, Burgess’ former spouse dumped a 50-pager affidavit on local police only six days after she had applied for what is assumed to be custody of the former couple’s children to the relevant Family Court.

All of the above, as well as the timeframes and specific approach favoured by Phoebe Burgess, said Wrench, constituted to him a clear indication of malice and retaliation, and not someone merely looking for justice to be served.

The player’s former spouse is, among other things, accusing him of assault and intimidation. He was also previously charged with domestic violence-related intimidation following an incident involving his having returned back home in order to pay his children a visit which had reportedly not gone according to plan as a result of mounting tensions between the now-separated couple.

Sam Burgess has denied all charges brought against him and has said that he will continue to do so until such time as his innocence has been proved beyond doubt.