Cautious Confidence Ahead Of Argentina

High Expectations Ahead Of Argentina 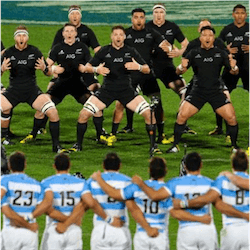 The All Blacks are probably feeling invincible after their recent 57-0 victory over the Springboks – and quite understandably so.  However, as we have so often seen in sports, anything can happen and becoming overly confident in one’s own performance ultimately almost always leads to a shockingly bad outcome.

The All Blacks will on October 1st be looking to secure their 5th victory in as many matches in this year’s Rugby Championship, when they go head to head with Argentina on the opposition’s home turf.

Ireland In Chicago All Over Again?

Beauden Barrett’s inclusion in the side to face Argentina on October 1st may have come as an unexpected decision but it’s certainly not an unpleasant turn of events for the first five-eighth.  Barrett, who was supposed to have been excluded from the stand-off in Argentina in order to catch up on some R&R ahead of facing the Springboks on October 8th, has been re-included in the side due to replace Lima Sopoaga.  Sopoaga and partner Miriam are awaiting the birth of their first child.  Steven Hansen has confirmed that Sopoaga will most likely be re-joining the side in South Africa, providing that the baby makes its appearance on time, of course.

Barrett, who has played all but 31 minutes of absence of the All Blacks’ 2017 season to date, has said that his inclusion came as no surprise and that he had been expecting it all along as the proposed break was too good to be true.  Barrett added that he was excited for Lima and that given the same situation, he would have opted to be present for the birth of his first child too.

The change doesn’t come sans concerns, though.  The last time the All Blacks faced an away test without their star lock combination duo did not end well at all – in fact, they were steamrolled by Ireland in Chicago.  Barrett, however, is of the opinion that there is little chance of history repeating itself as the squad had learnt the lessons that they were supposed to have learned from the experience.

Speaking to the press Barrett said that the key to success was essentially to keep the standards high, and that the team had learned a lot about “banana-skin” games since the Ireland debacle.  He went on to say that Argentina was a strong side and that they (the All Blacks) were going to have their hands full as it was – even without worrying about all sorts of other contingencies.