Cody Taylor In It For The Long Haul 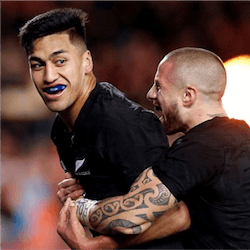 Cody Taylor has done what few would and none have – the former All Black has signed a long-term deal with New Zealand Rugby.  This means that his contract will be extending through 2021.  Taylor has cited the reason for the move as being in the best interests of his family – saying that the experience of raising a young family in New Zealand was to him, living the dream.

Taylor – currently in South Africa with the Crusaders ahead of the Super Rugby finals  – kicked off his pro-rugby career with Canterbury back in 2012.  The 26-year old had an impressive 2014 season, scoring three tries for Canterbury, and going on to making his debut as a fully-fledged All Black in 2015 – whilst securing a spot in the 2015 Rugby World Cup.

All Blacks coach Steve Hansen seemed elated at Taylor’s decision to extend his contract, saying that Taylor was an outstanding hooker and a key member of the All Blacks going forward into the future.  He also praised Taylor’s general temperament – saying that the young player had what it takes to play at world-class level.

Not Just Another Player

Taylor expressed an urgent desire to become a player known for adding value to the squad, saying that he did not wish to become just another member of the team.  It is most probably thanks to this core value that Taylor has managed to turn heads whilst starting in all three matches against the British and Irish Lions.  The young player said that a starting position would remain in his sights going forward – even as far as the 2019 Rugby World Cup.

Meanwhile in Johannesburg, South Africa, Lions coach Johan Ackermann has expressed pleasant surprise at the large number of Kiwis set to support the Lions when they go head to head with the Crusaders on the weekend.  Many have cited the reason for this being one of jealousy of the Crusaders.  The Crusaders are New Zealand’s most successful rugby team and holder of seven titles.

Ackermann went on to say that there was one remarkable thing that did not come as a surprise at all:  New Zealand’s passion for Rugby.  The Lions coach voiced his own theories regarding the Kiwis’ support of a South African team.  He likened it to the situation in South Africa – with fans bestowing such large measures of loyalty on provincial teams that they were most unwilling to root for any other province in the country – to the extent of even preferring an international team above a local team.