Crusaders To Hold On To Coach–Come What May 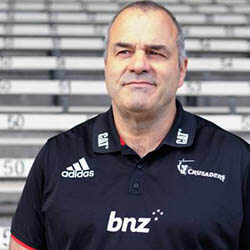 The man eager to next year join the British and Irish Lions for the duration of their tour of South Africa will remain on deck with the Crusaders. So said Crusaders CEO Colin Mansbridge of Scott Robertson’s aspirations to be selected to join Warren Gatland’s 2021 tour.

Even if Gatland does end up appointing the current Crusaders trainer to tag along as assistant coach, Robertson will remain appointed in his existing role with the New Zealand rugby union team, said Mansbridge. This after numerous Crusaders fans recently expressed concern over Robertson’s interest in joining the Lions tour.

Since Robertson will not be migrating from the role of head coach to one team to that of head coach to another team, Mansbridge said he’s convinced the Crusaders coach will be well able to successfully fill both roles. And it isn’t as if Robertson dumped anything out of the blue on Mansfield when he revealed his interest in the upcoming tour to the media either. The Crusaders have in fact long been aware of their head coach’s future aspirations, and even backed him when he ran for All Blacks coach last year.

And since the Lions are only scheduled to tour South Africa in July next year, Robertson will have had plenty of time to complete his 5th season with the New Zealand team before heading out to join the Lions on their tour.

Robertson is exceptional at self-management, explained Mansfield, and a man perfectly capable of head-on facing any challenge hurled his way.