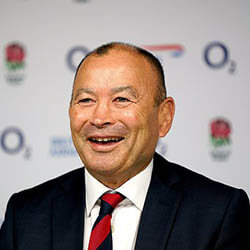 England rugby coach Eddie Jones says he has no intention of revealing his side’s plan of attack for the next Rugby World Cup anytime soon. They’ll be keeping their cards close to their chest, Jones said on Friday.

Jones also appeared completely unphased over his team’s so-called “lack of ambition” during their two opening victories in the Autumn Nations Cup. To Jones, it appears to be a matter of having well enough time remaining before preparation time actually kicks in. Jones said on Friday he’ll only start focusing on the World Cup after next year’s British and Irish Lions tour.

But instead of being overly secretive about his plans, Jones said it was never a good idea to plan too far ahead – especially not when preparing and planning for a Rugby World Cup. This, said the celebrated England coach, only ever achieved one thing, which is to give “it all always” to one’s opposition. The best sort of attack is one that is predicable to you, and completely out of the blue from the opposition’s point of view, Jones said.

Perhaps England’s biggest advantage in terms of this autumn is that they haven’t really had to go through the motions of a post-World Cup phase of analysing and re-building. Instead, they seem to have simply continued where they left off in the final lost to South Africa. This places them at a definite advantage over both Ireland and Wales.

As for Jones, his wish for his side is a simple one. That they’ll be the best and most talked-about team of the 2020s.