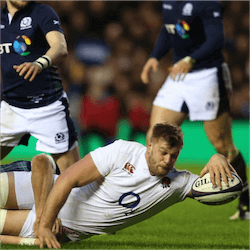 England will be going all out to become the very first team to win Rugby Union’s Six Nations three consecutive times in a row. However, the reigning champions will have their work cut out for them as they go into the competition without a number of key players, with an injury list as long as the tallest player’s arm.

This is bound to spur on Eddie Jones even more to beat the odds, given his absolute fixation on next year’s Rugby World Cup. Jones is notorious for his viewpoint on wanting his players to ultimately make him redundant as coach, what with sorting out problems on the field as they arise.

The general notion in Jones’ mind is that Ireland is England’s greatest threat, being the only side to which the English squad has lost twice whilst the good coach has been in charge. England and Ireland are ranked second and third in the world, so in a way, Jones’ opinion makes a great deal of sense. There’s obviously also Wales to consider, having won the Six Nations back in 2013, but since then it’s basically been a battle between two supreme sides.

England Vs. The Rest

Scotland and Wales are first up in Cardiff in the tournament opener on Saturday afternoon. Ireland and France are also at it on Saturday, with all four bound to try and do what they can to deny England yet another Six Nations victory.

England is bound to make a stellar head start towards defending their title, going first up against Italy on Sunday. Italy has not won a game in the Six Nations tournament since 2015. Talk about a confidence boost to look forward to.

Scotland lead the way as far as the hopeless romantics go, but front-row casualties are bound to test their limits from start to finish. To add insult to injury, they are traditionally a side who need to keep in together in the front for them to make any difference. Scotland will be playing their second and third matches at home, but even this may prove to not make much of a difference to their overall fate, what with their not having triumphed over England at Murrayfield since 2004.

France’s fate isn’t looking any more rose-coloured than that of Scotland. It’s been eight years since they last won the title and with a squad awash with foreign players, it’s no longer a matter of national pride in any way, even if they did pull a golden bunny from the hat.