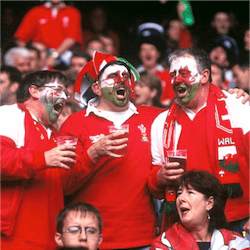 Rugby in the time of bad behaviour.  This is the situation that has been prevailing in Wales, especially after the recent clash between Wales and New Zealand in the town of Cardiff.  Following a bout of particularly bad behaviour, Welsh fans have been warned that if the situation were to continue on the sordid path of disruption, a complete alcohol ban would be imposed at the Principality Stadium.

The dire nature of the issue really came to light after a comment by Chief Inspector Mark Cleland of British Transport on social media.  Cleland tweeted about his disappointment regarding the behaviour of Welsh fans after the All Blacks beat Wales 33-18 on the weekend.

Cleland tweeted that it was a disappointment to see that rugby fans were in effect as bad, or even worse, than football fans.  The lashing out sparked comments from other supporters, with many stories concerning a poor experience as a result of the disruption, coming to the fore.  More shocking perhaps, was the rumour that a disabled man had in fact been verbally abused by some of the fans that had been there to watch the game.

The Matter Of Legality

The Welsh Rugby Union issued a statement after the unpleasant incident, staying that it was legally bound not to serve any alcohol to people who were already drunk, at the Principality Stadium.  Speaking to a prominent Welsh radio station, police commissioner Alum Michael said if fans were to continue behaving badly, aggressively and in poor taste, then increased pressure would be applied in favour of a permanent ban on all alcoholic beverages at all future games.

He went on to say that his plea for self-control should be viewed in the correct manner and should be seen as a call for self-control, an understanding as to how to behave appropriately in any situation and not pitching up at an event after having already drunk too much.

The statements on social media have sparked an outcry from supporters all wanting to tell the story of how they were not taken into account by some or other unruly rugby supporter.  Most refer to a common tirade of foul language and even intimidation.  Reference is also made to the fact that fans keep getting up and leaving their seats in order to purchase more alcohol, much to the frustration of those actually wanting to follow the game.