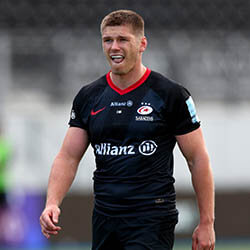 England captain Owen Farrell should not be allowed too easily off the hook for his “clothesline” tackle of Charlie Atkinson. Such is the general consensus regarding Farrell’s latest dangerous tackle, and so much so that many are calling for a ban of at least 10 weeks for the notorious repeat offender.

Even though Farrell has found a loyal supporter in the form of former WWE wrestling star John Layfield, who says he believes Farrell’s particular playing style to be nothing more than the typical rough and tumble of big-boy rugby, former England player Sandy Goode says he could not disagree more. Describing Farrell to be upright and even out of control, Goode says he believes this sort of tackle to be dangerous and a thing that should be eradicated completely from professional rugby.

What’s more, Goode said he cannot see why Farrell’s position as captain should in any way play a role in any punishment-related decision or outcome. That he’s Owen Farrell or that he’s England’s captain shouldn’t even feature in Farrell’s disciplinary hearing, insisted Goode in a column written for a rugby news and opinion page.

Goode even went as far as to say that had Farrell been a Kiwi or Aussie player, and found to have been the guilty party at the dishing-out end of clothesline tackles, he would surely by now have been at the receiving end of many people calling on the maximum allowable penalty.

Those who are about to decide Farrell’s fate, said Goode, should in all fairness forget who it is they’re thinking about punishing.