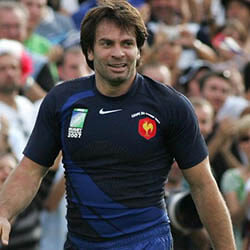 Dominici dominated the French rugby scene at the turn of the century. Described by his former club as a genius of rugby and an on-field companion without equal, the legend is survived by his wife Loretta, and daughters Mia and Chiara.

Remembered as a lively and charismatic player, the former Francais Paris wing played 67 for France during the period 1997-2007. He scored a total of 25 tries for his country, including one of the most celebrated in the history of the Rugby World Cup.

Dominici pulled off one of the most historical performances in world rugby when during the 1999 semi-final against the All Blacks at Twickenham, England, he timed a bounced ball from halfback Fabien Galthie with such precision that he was able to grab the ball with his right hand before tearing at lightning speed past two defenders to place it securely between the posts. He was also part of the French side that caused the massive 2007 World Cup upset of New Zealand during that year’s quarterfinals.

At domestic level, the legend won an impressive five French championships during his 11-year act with Stade Francais.

A statement issued by the French Rugby Federation describes Dominici to have been an emblematic player, and his death the loss of a legend to his rugby family.