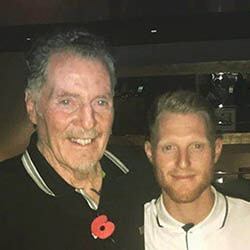 Gerard Stokes, former Kiwi Rugby League International and father of England Cricket start Ben, has fallen seriously ill in South Africa. Ged, as the elder Stokes is fondly known, who is based in Christchurch, was admitted into a Johannesburg hospital on Monday, where he remains in a critical condition. Thus Ben Stokes got excused from the English team’s training session in Centurion, South Africa, just ahead of the squad’s first Test against South Africa. He has to his father’s bedside.

Joe Root, Captain for the team, has said that this incident has put things into perspective for him. He said that, although everyone was in the country to play top-level Cricket, it is important that Ben and his family get the kind of support they need. He stressed the importance of respecting the players’ privacy.

Ged Stokes was a solid Front-Row Forward who played a single Test for the Kiwis in 1982. He then turned to coaching and never looked back. He and his wife raised Ben, their son with a gift for sport, in Christchurch and Wellington before the family moved to Workington Town in Northern England. Ben was then 12-years old and never looked back. He took the Cricket world by storm and went on to become one of the best All-Rounders in the world. His parents have since returned to Christchurch but travel alongside their son to support them. Ben defeated the country of his brick in the Lord’s Cricket World Cup Final in July with dominant innings that set up a tie and ended in an English victory on boundary countback.